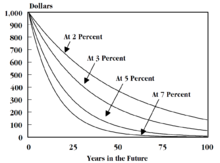 The time value of money is the widely accepted conjecture that there is greater benefit to receiving a sum of money now rather than an identical sum later. It may be seen as an implication of the later-developed concept of time preference.

The time value of money is among the factors considered when weighing the opportunity costs of spending rather than saving or investing money. As such, it is among the reasons why interest is paid or earned: interest, whether it is on a bank deposit or debt, compensates the depositor or lender for the loss of their use of their money. Investors are willing to forgo spending their money now only if they expect a favorable net return on their investment in the future, such that the increased value to be available later is sufficiently high to offset both the preference to spending money now and inflation (if present); see required rate of return.

The notion was later described by Martín de Azpilcueta (1491–1586) of the School of Salamanca.

In a typical case, the variables might be: a balance (the real or nominal value of a debt or a financial asset in terms of monetary units), a periodic rate of interest, the number of periods, and a series of cash flows. (In the case of a debt, cash flows are payments against principal and interest; in the case of a financial asset, these are contributions to or withdrawals from the balance.) More generally, the cash flows may not be periodic but may be specified individually. Any of these variables may be the independent variable (the sought-for answer) in a given problem. For example, one may know that: the interest is 0.5% per period (per month, say); the number of periods is 60 (months); the initial balance (of the debt, in this case) is 25,000 units; and the final balance is 0 units. The unknown variable may be the monthly payment that the borrower must pay.

For example, £100 invested for one year, earning 5% interest, will be worth £105 after one year; therefore, £100 paid now and £105 paid exactly one year later both have the same value to a recipient who expects 5% interest assuming that inflation would be zero percent. That is, £100 invested for one year at 5% interest has a future value of £105 under the assumption that inflation would be zero percent.[2]

This principle allows for the valuation of a likely stream of income in the future, in such a way that annual incomes are discounted and then added together, thus providing a lump-sum “present value” of the entire income stream; all of the standard calculations for time value of money derive from the most basic algebraic expression for the present value of a future sum, “discounted” to the present by an amount equal to the time value of money. For example, the future value sum

to give the present value sum

Some standard calculations based on the time value of money are:

Present value of a perpetuity is an infinite and constant stream of identical cash flows.[5]

For any of the equations below, the formula may also be rearranged to determine one of the other unknowns. In the case of the standard annuity formula, there is no closed-form algebraic solution for the interest rate (although financial calculators and spreadsheet programs can readily determine solutions through rapid trial and error algorithms).

These equations are frequently combined for particular uses. For example, bonds can be readily priced using these equations. A typical coupon bond is composed of two types of payments: a stream of coupon payments similar to an annuity, and a lump-sum return of capital at the end of the bond’s maturity—that is, a future payment. The two formulas can be combined to determine the present value of the bond.

The rate of return in the calculations can be either the variable solved for, or a predefined variable that measures a discount rate, interest, inflation, rate of return, cost of equity, cost of debt or any number of other analogous concepts. The choice of the appropriate rate is critical to the exercise, and the use of an incorrect discount rate will make the results meaningless.

The following formula use these common variables:

Future value of a present sum

The future value (FV) formula is similar and uses the same variables.

Present value of a future sum

The present value (PV) formula has four variables, each of which can be solved for by numerical methods:

The cumulative present value of future cash flows can be calculated by summing the contributions of FVt, the value of cash flow at time t:

Note that this series can be summed for a given value of n, or when n is ∞.[8] This is a very general formula, which leads to several important special cases given below.

Present value of an annuity for n payment periods

In this case the cash flow values remain the same throughout the n periods. The present value of an annuity (PVA) formula has four variables, each of which can be solved for by numerical methods:

To get the PV of an annuity due, multiply the above equation by (1 + i).

Present value of a growing annuity

In this case each cash flow grows by a factor of (1+g). Similar to the formula for an annuity, the present value of a growing annuity (PVGA) uses the same variables with the addition of g as the rate of growth of the annuity (A is the annuity payment in the first period). This is a calculation that is rarely provided for on financial calculators.

To get the PV of a growing annuity due, multiply the above equation by (1 + i).

Present value of a perpetuity

A perpetuity is payments of a set amount of money that occur on a routine basis and continue forever. When n → ∞, the PV of a perpetuity (a perpetual annuity) formula becomes a simple division.

Present value of a growing perpetuity

When the perpetual annuity payment grows at a fixed rate (g, with g < i) the value is determined according to the following formula, obtained by setting n to infinity in the earlier formula for a growing perpetuity:

In practice, there are few securities with precise characteristics, and the application of this valuation approach is subject to various qualifications and modifications. Most importantly, it is rare to find a growing perpetual annuity with fixed rates of growth and true perpetual cash flow generation. Despite these qualifications, the general approach may be used in valuations of real estate, equities, and other assets.

This is the well known Gordon growth model used for stock valuation.

Future value of an annuity

The future value (after n periods) of an annuity (FVA) formula has four variables, each of which can be solved for by numerical methods:

To get the FV of an annuity due, multiply the above equation by (1 + i).

Future value of a growing annuity

The future value (after n periods) of a growing annuity (FVA) formula has five variables, each of which can be solved for by numerical methods:

The following table summarizes the different formulas commonly used in calculating the time value of money.[9] These values are often displayed in tables where the interest rate and time are specified.

Summing over all payments from time 1 to time n, then reversing t

Note that no money enters or leaves the combined system of endowment principal + accumulated annuity payments, and thus the future value of this system can be computed simply via the future value formula:

Initially, before any payments, the present value of the system is just the endowment principal,

). Plugging this back into the equation:

Without showing the formal derivation here, the perpetuity formula is derived from the annuity formula. Specifically, the term:

can be seen to approach the value of 1 as n grows larger. At infinity, it is equal to 1, leaving

as the only term remaining.

This can be generalized to discount rates that vary over time: instead of a constant discount rate r, one uses a function of time r(t). In that case the discount factor, and thus the present value, of a cash flow at time T is given by the integral of the continuously compounded rate r(t):

These formulas assume that payment A is made in the first payment period and annuity ends at time t.[10]

Ordinary and partial differential equations (ODEs and PDEs) – equations involving derivatives and one (respectively, multiple) variables are ubiquitous in more advanced treatments of financial mathematics. While time value of money can be understood without using the framework of differential equations, the added sophistication sheds additional light on time value, and provides a simple introduction before considering more complicated and less familiar situations. This exposition follows (Carr & Flesaker 2006, pp. 6–7).

The fundamental change that the differential equation perspective brings is that, rather than computing a number (the present value now), one computes a function (the present value now or at any point in future). This function may then be analyzed—how does its value change over time—or compared with other functions.

Formally, the statement that “value decreases over time” is given by defining the linear differential operator

This states that values decreases (−) over time (∂t) at the discount rate (r(t)). Applied to a function it yields:

For an instrument whose payment stream is described by f(t), the value V(t) satisfies the inhomogeneous first-order ODE

The standard technique tool in the analysis of ODEs is Green’s functions, from which other solutions can be built. In terms of time value of money, the Green’s function (for the time value ODE) is the value of a bond paying £1 at a single point in time u – the value of any other stream of cash flows can then be obtained by taking combinations of this basic cash flow. In mathematical terms, this instantaneous cash flow is modeled as a Dirac delta function

where H is the Heaviside step function – the notation “

” is to emphasize that u is a parameter (fixed in any instance—the time when the cash flow will occur), while t is a variable (time). In other words, future cash flows are exponentially discounted (exp) by the sum (integral,

) of the future discount rates (

for future, r(v) for discount rates), while past cash flows are worth 0 (

In case the discount rate is constant,

is “time remaining until cash flow”.

for no time horizon) the value at time t,

is given by combining the values of these individual cash flows:

This formalizes time value of money to future values of cash flows with varying discount rates, and is the basis of many formulas in financial mathematics, such as the Black–Scholes formula with varying interest rates.

Ofer Abarbanel is a 25 year securities lending broker and expert who has advised many Israeli regulators, among them the Israel Tax Authority, with respect to stock loans, repurchase agreements and credit derivatives. Founder TBIL.co STATX Fund.